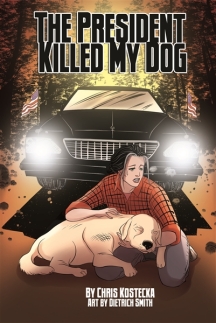 This week I have a comic review for you.

And like the comic it will be sweet, but short.

And I mean that in the best way possible.

Chris Kostecka’s The President Killed My Dog is about a woman named Mary whose only companion since her husbands death is her beloved dog, Cindy. When her dog ends up hurt and killed she knows who is to blame and who she has to get revenge on…the President of the United States. Illustrations are by Dietrich Smith.

This was a very short comic, but one that I found pretty interesting. I really liked the story and being able to see this women try to find companionship in a dog after her husband dies and her friends drift away from her. It was extremely hard to read when the dog passes away when you get to understand how much she meant to Mary.

I thought the illustration were wonderful and had a few realistic, but also still looked like many other comics I have read in the past.

If I had to say something I didn’t like it’d probably just be the length. I really wanted more from the ending and am hoping that it was just left on a cliffhanger until the next issue of the comic. Which I will definitely be picking up.

Overall, this was a emotional and easy read. The pictures were fantastically illustrated and the story left me wanting more. Hopefully there will be another issue and we will get to see the fate and consequences of Mary’s actions.

Until next time dear readers.

I was sent this comic book by Bad Aura comics in exchange for an honest review.